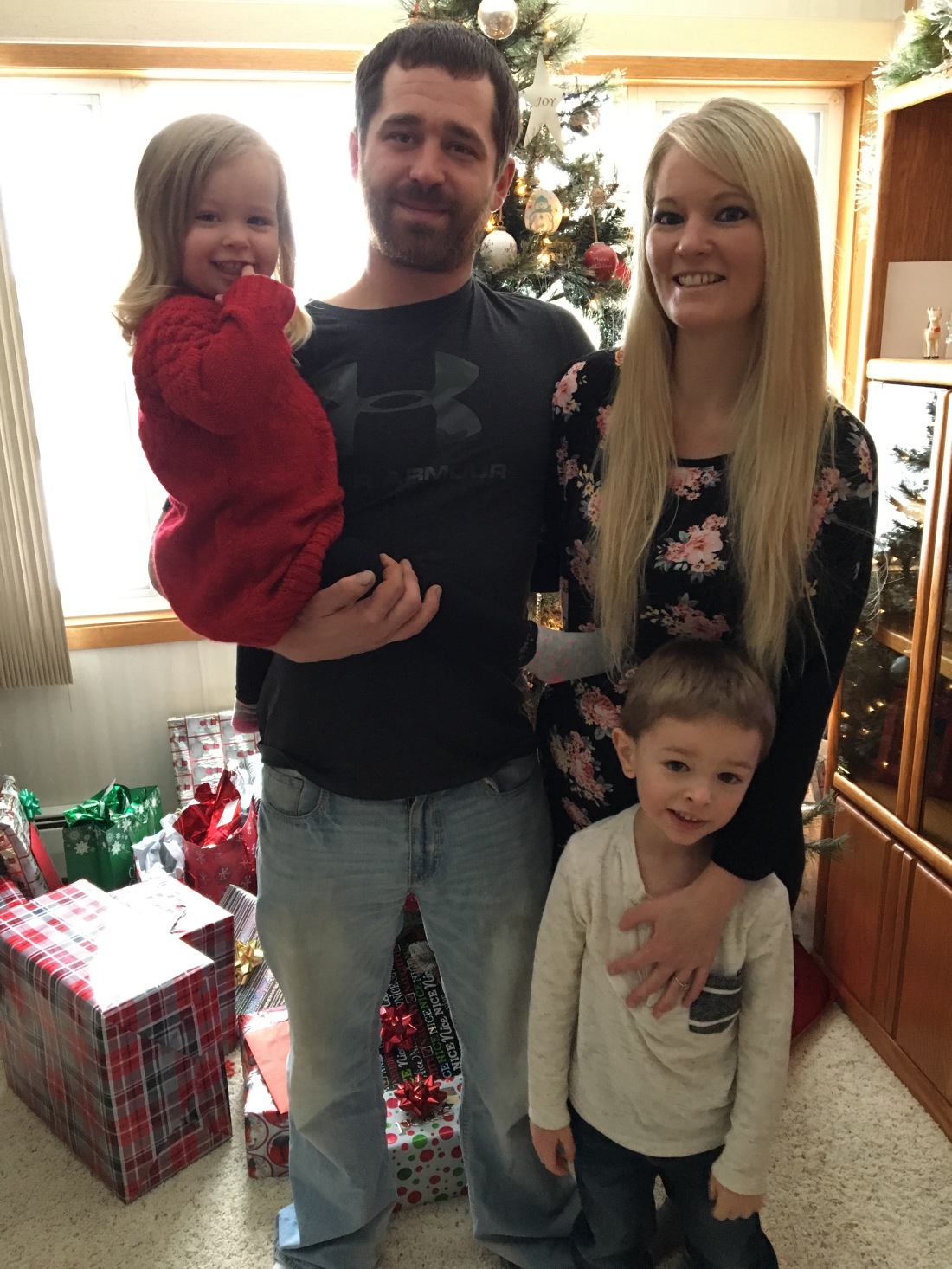 I have at least one “first” every single month until August. You know the dreaded first times that you have to spend a holiday or celebration without someone. And I knew Christmas was going to be one of the toughest. You would think this would have been a hard time of year for our family because depression seems to get the best of people, but Jesse loved Christmas. He liked people to think he was a grump, but a true grump doesn’t sport a shit eating grin when they come home to find their wife has turned the house into Santa’s workshop. He always told me he loved how I made our house feel like a home….which apparently was linked directly to my seasonal decor and not to my burnt suppers and obsessive compulsive pattern for folding underwear. December has without a doubt been tough, but as I’ve managed to stumble my way through it, I feel like I’ve been able to create a little survival guide that maybe someone else could benefit from some day. So here it is…

I really dragged my feet with this one, even contemplated getting one of those stupid “upside down trees” that have created a social media uproar…you know, just to purposely piss a few people off because misery loves company; but after having it out with the lights for about 45 minutes I let the kids mostly do the rest and it didn’t feel so bad. Now we have a “partially decorated to as high as my son could reach” tree, and it’s the most beautiful Christmas tree you’ll ever see. I’m telling you, just pass this one on to the kids, they’ll love it. My son was SO pumped I even let him hang the very dangerous decorations with the pokey things {bulbs with small hooks}. I only let HIM, as I was afraid if I let his little sister handle them too they’d eventually get into an argument (they did) and she’d get stabby, and we’d end up in the ER, and I’d be known as THAT MOM who lets her kids play with sharp objects. I’m already THAT MOM who swears too much, worries too much and doesn’t know at 32 years old what she wants to be when she grows up, so I figured I better not hog all the glorious labels. That would be selfish.

I thought shopping by myself was going to be torture since my husband LOVED tagging along to make sure we spoiled the shit out of the kids, but then I remembered that I could do almost all of it from home. In sweatpants. While simultaneously stuffing my face with Doritos and chugging red wine like a classy lady. I highly recommend doing this even if you’re not a grieving widow, just don’t forget the taco dip like I did. Total rookie mistake that will never happen again.

I remember watching Home Alone for the first time with our boy last year and laughing with Jesse at how hard T was laughing at the pain and suffering of those dummy bandits. I’ve been wanting to ask him if he’d like to watch it together again, but I’ve yet to bring myself to do it. Because even though I love to spend 2 hours judging Kevin’s mom (who the hell completely forgets about one of their children and leaves on a plane for Paris), that empty seat next to me on the couch just makes it not the same. I still have the urge sometimes to reach over and nudge Jesse when the kids do something cute or funny. I miss having someone here who appreciates them on my level….being able to look at them and think “We created that!”

So instead of torturing yourself with those movies you loved watching together, I strongly suggest getting sucked into the Hallmark channel and torturing yourself with love story after love story. Finding yourself suddenly “available” can be something that’s really hard to wrap your mind around…I mean REALLY hard. And I feel like the best way to begin to process it is filling your head with unrealistic expectations on love and “dating” in 2017. Did I just say DATING? Yes. I did. I’ll give you a minute to let that one sink in…..Don’t worry, I freaked out too.

A little Hallmark spoiler: Megan will always realize she was meant to be with Derek by Christmas. Unless she’s been keeping it a secret that she’s one of Santa’s elves, in which case her ass is going straight back to the North Pole as soon as her work here is done.

The worst thing of them all, #4–Gift Wrapping

Let me explain why this is the worst, because you’re probably confused. Imagine sitting down to wrap that first present to your kid, slapping on the first gift tag, and immediately feeling like someone socked you in the gut when you look down and stare at that empty space under the word FROM. Just like when you had to list each parent for their new school or their medical information at your new clinic. There’s only one name going there now. Yours. Because you are it. Your kids are growing up without their dad. They only have a mom. And that is the saddest, most F’d up thing about this whole scenario. They deserved better. They really did. And because of that, you will keep going. Just like you’ve had to keep putting one foot in front of the other, you keep wrapping through the tears and the anger, one present after the other, one “From Mom” after the other, until they’re done. And you can take a deep breathe and cross one more “first” off your list.

This isn’t just difficult and confusing for you, it is for them too, so you’re going to put on your big girl panties and do the hard shit. End of story.

On any given day of the year it’s pretty easy to get your ego bruised by the highlight reels people post on their social media pages, so chances are if you’re caught in the scroll trance on one of your lowest days, you’re not going to walk away from it a better person. In fact, you might end up even more resentful, bitter and irrational than you were before. The dumbest things can set you off, like a mean quote shared on Facebook that states “If you single in December, you ugly.” Normally you would recognize that a not very smart person obviously made this up, due to the use of “you” instead of the grammatically correct “you’re” or “you are.” When you’re grieving, however, you have mastered the art of overthinking and immediately begin to panic, because you were not aware of these unspoken rules associated with no longer being attached to someone, and somehow in a matter of just a few months you went from married, to a sad widow, to a sad and single and ugly widow. Ouch. That really stings! And it will ruin your entire day and lead to you buying $200 of fancy makeup in an attempt to gain some confidence back if you’re not careful. So just find something else to fill your time until after the new year. I hear bird watching can be fun.

I know my situation is not unique or special. There are unfortunately others who are feeling the exact same way that I do this holiday season. And if that’s you, I just want you to know that it’s ok to not be ok, and it’s ok to make others be ok with you not being ok. Whether it’s copious amounts of wine, space and alone time, a vacation or a puppy, you do whatever you need to do to survive. You don’t owe anybody anything (except the tiny humans), and your one and only job is to make it to December 26th. Whatever it takes.